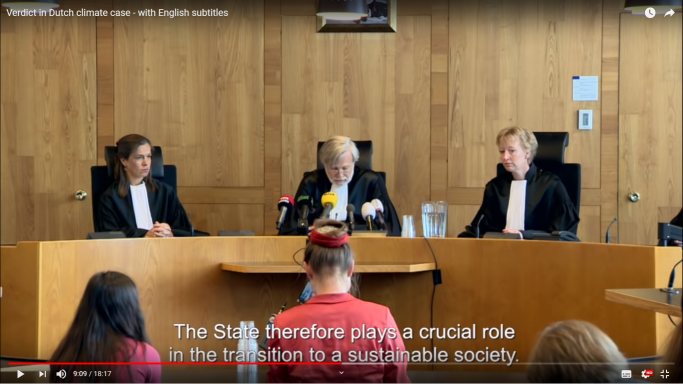 The court in The Hague has upheld a historic legal order on the Dutch government to accelerate carbon emissions cuts, a day after the world’s climate scientists warned that time was running out to avoid dangerous warming.
The case inspires citizens from other countries to hold their governments accountable, by starting/continuing similar lawsuits.

Today, the Hague Court of Appeal upheld the historic victory of the Urgenda Foundation and 886 Dutch citizens in their climate case against the Dutch Government. The Appeal Court affirmed that the Government must reduce emissions by at least 25% by 2020 compared to 1990 levels. Reductions of a lesser amount would be a violation of the rights of Dutch citizens as protected by the European Convention on Human Rights.


The decision comes the day after the world’s leading climate change authority, the IPCC, published a special report starkly outlining the devastating consequences of governments’ current climate policies, including the existential threat to low-lying countries like the Netherlands.


The Appeal Court’s findings are consistent with the call to Governments to reduce emissions without delay. Dutch emissions levels are currently only 13% lower than they were in 1990 and have stagnated over the last 6 years.


Marjan Minnesma, director of Urgenda, stated: “Our victory today confirms that the Dutch Government should have focused its efforts on increasing action on climate change, and not on fighting a case that has brought so much hope and inspiration around the world. The special report of the IPCC emphasises that we need to reduce emissions with much greater urgency. The Dutch government knows that as a low-lying country we are on the frontline of climate change. Our own government agencies recently concluded that in the worst case scenario sea levels might rise by 2.5 to 3 meters by the end of the century. The Court of Appeal’s decision puts all governments on notice. They must act now, or they will be held to account.”


Joos Ockels, one of the co-plaintiffs that initiated the case, stated: “Like the decision in 2015, today’s judgment has given us real hope. It is even clearer now than it was three years ago that climate change is the defining issue of our lives and our children’s lives. We cannot wait any longer for real action, which is why we took the Dutch Government court. We hope that this will be the wake-up call that governments around the world need to hear.”

How to build back better after COVID-19